Asgardian Stones Slot by NetEnt to play at online casinos

What is Asgardian Stones Slot?

Scandinavian mythology, along with the Egyptian theme, is the most popular subject, inspiring gaming machine vendors to create their own gambling products. NetEnt also did not resist the temptation to create their Asgardian Stones Slot based on the fascinating and gloomy legends of the Vikings. Today, the game is available in many casinos for money, and thematic portals offer their visitors to play it in the demo a mode.

The first thing that should be mentioned in a review is the original design of the slot. During gameplay, five reels turn into huge blocks of stone, which, sometimes, can take four, and even six cells, forming a square. Stone symbols fall on the field with a roar, sometimes breaking up other, smaller characters. The slot is created using the popular for online games. HTML5 technology, which means it can be run on mobile devices.

The control panel is located at the bottom of the screen. A button in the center with a magic rune starts the gameplay. The winning combination is formed by symbols of the same type that have fallen on neighboring reels. There can be 3, 4, 5 of them. The amount of winnings depends on their quantity. Any effective combination will be the key to the Avalanche option. The pictures that made it up disappear; the remaining ones are shifted down the playing field of the slot. Empty cells fill in new pictures. This allows a player to make more winning combinations. The multiplier increases with each successful spin. An important parameter is the size of the bet, which is regulated by the corresponding buttons. For the maximum number of credits, the Max bet key is provided. The automatic rotation mode is activated by the Autoplay button. The gameplay features are described in the help section, which opens with an i key.

The symbols in the game are stone images of ancient gods, as well as letters and numbers indicating the face values of the cards. The Wild is represented by the stone letter “W”.

All icons differ from standard characters not only in unique functions but also in size. These are Colossal Symbols. They occupy not 1 cell but are placed according to a 2×2 or 3×3 scheme. When calculating successful matches, each position is considered separately. 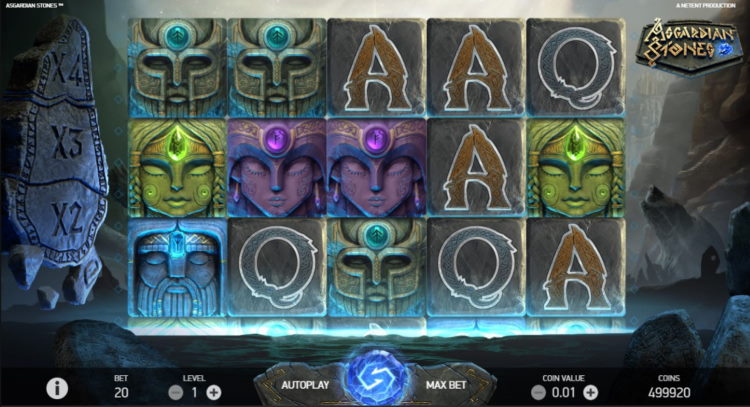 Wild, performing the function of a substitution increases the number of winning com combinations. The Wheel of Fortune is a Bonus Symbol of Asgardian Stones. It launches the Bonus Wheel. Its sectors show cash prizes and free spins. The result will be known after it stops.

Despite the developer’s non-standard approach to design, the game is easy to be managed. However, some players find it a bit slow. Despite this minus, NetEnt Asgardian Stones is chosen by the players very often.